North America
all you need to know

In 2020, the Canadian economy contracted by 5.4%, the US economy by 3.5%. Like almost every economy in the world, the two North American powerhouses were hit hard enough by the COVID-19 pandemic to tip them into recession.

The good news is that both countries are bouncing back almost as quickly, with Canada’s economy set to grow by 5% in 2021 and America’s by 6.4%. By pre-pandemic standards, these are Chinese growth rates that would have astonished and delighted North American policymakers just a year or two ago.

By the second quarter of 2021, American GDP was once more as big as it had been before the pandemic. Inevitably, the US economy is the focus of much of this report, which covers the US and Canada (for information about Mexico, see the PPRO Payments and E-commerce Report for Latin America). The US accounts for 93% of the region’s GDP. And 75% of Canada’s exports go to the United States. If you want to know whether Canada is likely to prosper in any given year, the best indicator is the predicted performance of the US economy.

In August 2021, the US Senate approved President Biden’s US$1.2 trillion stimulus plan, designed to modernise the US economy and infrastructure as well as give the country the boost it needs to exit the pandemic into a period of sustained growth. Economists from Moody’s expect the plan to help the US sustain the growth of nearly 4% well into the middle of the decade and to add more jobs than would have been created without it.

Unsurprisingly, given how interlinked the two economies are, the impact of Biden’s stimulus bill is also expected to spill over into Canada. “The U.S. has a lot of fiscal stimulus underway and more spending on infrastructure in the pipeline,” Bank of Canada deputy governor Timothy Lane told The Wall Street Journal. “All of that is generally going to be favourable for Canada”.

Both countries were successful in administering mass COVID-19 vaccination during the first half of 2021. And in both, infection rates seemed to be falling rapidly. In Canada, at the start of April 2021, there was a confirmed weekly increase of over 10,000 cases. By July, this was down to just 2,700. The US seemed to be following the same pattern. But at the start of August, there was a significant rise in the number of new cases. This spike in infections seems to have been caused by a combination of vaccine hesitancy and the spread of the more infectious Delta variant

North Americans are some of the world’s richest consumers. Per capita, they earn almost a third again more than Britons or the inhabitants of the eurozone and almost six times what the average Chinese consumer earns [30]. They live in affluent, secure, well-connected societies. They’re used to banking, paying and shopping online. And the region’s e-commerce market has expanded significantly during lockdown. For any merchant looking to increase their revenues and expand their business, North America is a highly attractive market. 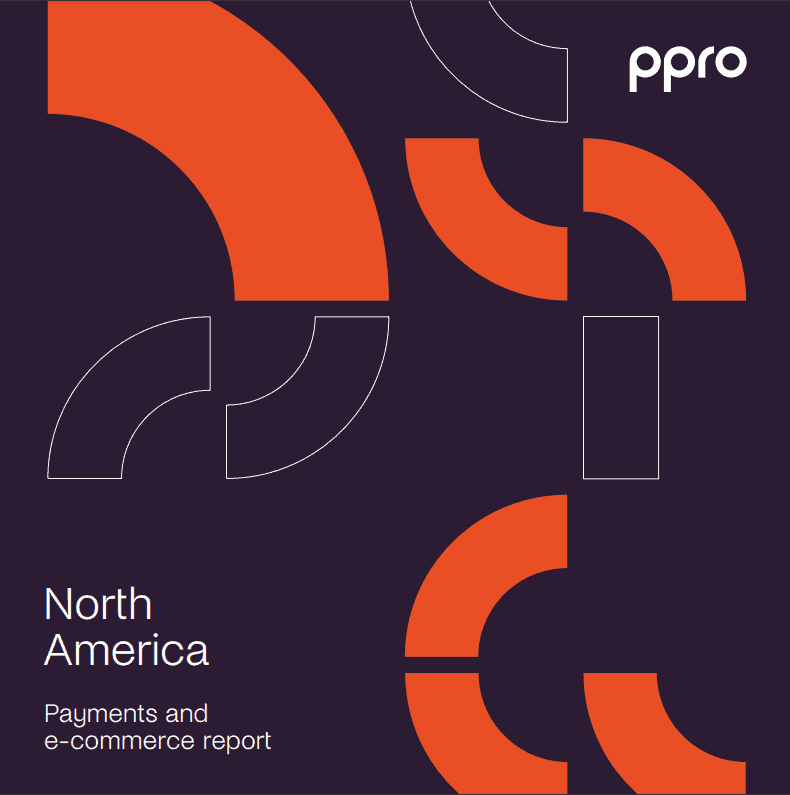 According to the last annualised figures available, the total e-commerce market in the United States is worth US$ 1,277 bn. It’s growing at a rate of 12% a year. An average US e-commerce shopper spends US$ 3,877 a year online. E-commerce sales represent almost 14% of total retail sales. The most popular purchase categories are health and beauty (22%), travel (20%) and electrical goods (16%).

In Canada, e-commerce is worth US$ 71 bn and is growing at a rate of 15% a year. As well as being less likely to shop online than Americans, Canadians are also less likely to shop using a mobile device. Just 36% of online purchases were completed on a tablet or smartphone.

Both markets have seen a massive boost to online commerce since the start of the pandemic. In the United States, according to a report by Adobe, the e-commerce market grew by US$ 183 billion in 2020 to a total value of US$ 844 billion. The company expects US online retail to have its first trillion-dollar year by 2022.

In Canada, the e-commerce grew by 32%. Around 30% of Canadians now do their grocery shopping online, double the figure from before lockdown. Talking to eMarketer, Toronto-based retail analyst Marina Strauss predicted that the pandemic will permanently alter Canadian’s shopping habits: bad news for brick-and-mortar stores but good news for e-commerce merchants.

North Americans pay for 63% of all online purchases with card-based payment methods. They use e-wallets in 27% of all online transactions, bank transfers in 6%, and cash in 1%.

Online shoppers pay for the remaining 3% of e-commerce transactions using a range of niche and specialist payment methods.

Visa has 56% of the credit card market, Mastercard 24%, American Express 9%, and various local and specialist providers the remaining 11%.

The USMCA, the treaty which replaced NAFTA, raised the value of goods which Canadians and Americans can import without having to pay duties on from US$ 20 to US$ 150. That’s good news for cross-border merchants from the States. The law came into force on 1 July 2020.

94% of Canadians and 90% of Americans have some kind of internet connection. The roll-out of 5G in the US has been slow. It may be that even by 2023, a third of the US population is still unable to receive a next-generation mobile broadband service. In Canada, 5G will only make up half of all mobile-broadband subscriptions, even by as late as 2025.

The United States ranks 14th out of 160 in the World Bank’s Global Logistical Performance Index. In response to the rapid growth of e-commerce, the carrier industry in the USA has been expanding rapidly. At times, the US Postal Service struggled to cope during the pandemic, with volumes rising by 30%. The post office also announced a rise in the price of sending packages of up to 6.5%, with the exact increase depending on what’s being sent and how.  Canada ranks 20th on the index. Parcel numbers handled by Canada Post increased by 22% in 2020, the result of a lockdown-fuelled increased in e-commerce volumes.