Eastern Europe & the CIS
all you need to know

In Russia, the economy suffered from the fall in demand for oil and gas. Rosneft, for instance, one of Russia’s leading oil and gas extractors, saw a 10% decline in output in the first quarter of 2020 alone. Russia’s crude exports for 2020 were down 11% from the previous year. This was offset somewhat, however, by an increase in non-energy exports, particularly in agricultural products, of 20% on the year before.

In Ukraine, the contraction of 2020 ended four years of growth. The economy suffered not just from the impact of the pandemic, but also from the ongoing drain imposed by the seven-year war and Russian occupation of the country’s eastern provinces. According to one study, Ukraine’s per capita GDP shrank by 15% over the course of the first four years of the war.

The economies of the EU and eurozone countries such as the Baltic states and Romania are tightly bound to the fate of the other single-market countries. According to a report by Estonia’s parliament, the Baltic economies were cushioned from the worst impacts of the COVID-19 pandemic by their close links to the Nordic economies. The latter performed relatively well during the pandemic, enabling trade with their neighbours to continue with as little interruption as possible.

Bulgaria’s economy was impacted significantly by the reintroduction of lockdown at the end of 2020, as a second wave of the virus swept over the country. The pandemic was particularly damaging to one of the country’s main sources of income: tourism. The World Bank has highlighted the importance of not withdrawing government economic support too quickly, even once the crisis phase of the pandemic has passed.

Another good economic performer was Romania. After a decade of solid growth, the government reacted quickly to the crisis, imposing lockdown and pumping a stimulus worth over 4% of GDP into the economy. Sectors such as tourism and hospitality were severely affected by the pandemic. But the overall economy is expected to bounce back at a rate of 7% in 2021.

Nor is Romania alone in this. All the countries covered by this report are expected to return to robust growth in 2021. Russian GDP, for instance, is forecast to grow by 3.8%, and Ukraine’s by 4%.

Eastern Europe and the CIS are a highly diverse group of countries with different challenges and consumer preferences from one market to the next. A strategy that works in Estonia, for instance, may not be right for Ukraine or Russia. In general, however, these markets are well connected, with their citizens increasingly used to shopping online. And lockdown has, as everywhere, brought new demographics online for the first time. 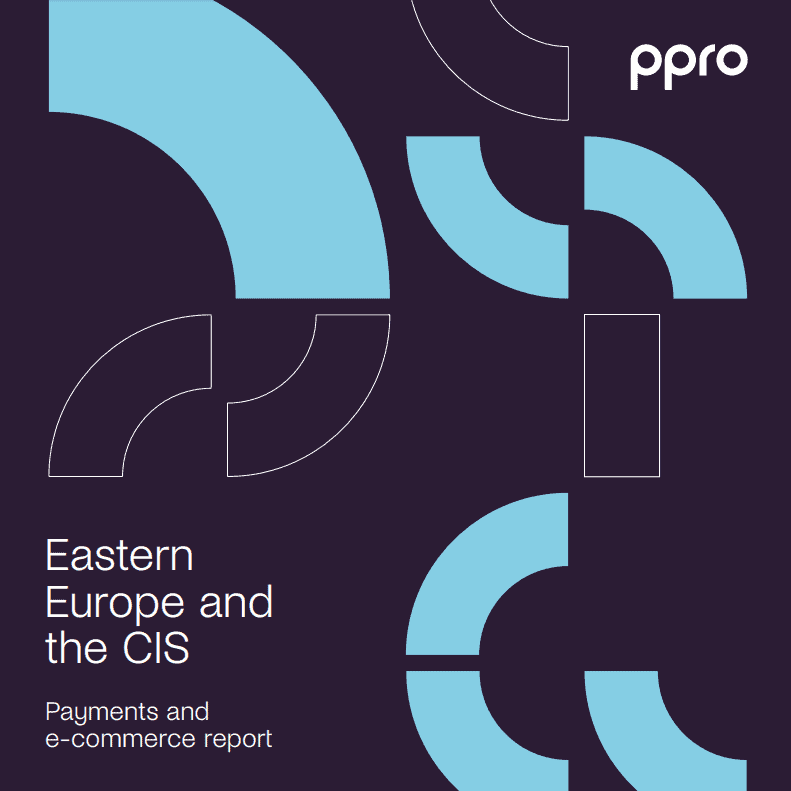 On the eve of the pandemic, the e-commerce market in Eastern Europe and the CIS was worth US$46 billion and was growing at a rate of 14% a year. Eastern Europeans complete just under 30% of their online purchases using a mobile device. The average online shopper spends US$271 a year with e-commerce merchants.

According to one preliminary estimate, the e-commerce market in Russia grew by up to 40% in 2020 and is expected to grow by 10-15% a year. In Ukraine, e-commerce grew by an estimated 41% during 2020, in Romania by 30%. Eastern Europeans and citizens of CIS states are turning to e-commerce for public health reasons but also for convenience.

The most popular form of online payment in this region is card based payment, with a 33% market share of all e-commerce transactions. This is despite just 18% of people having a credit card. This suggests a large number of people who are connected but who aren’t shopping, or at least aren’t shopping regularly, online.

Online shoppers use cash in 24% of e-commerce transactions, e-wallets in 23%, bank transfers in 17%, and a range of other payment methods in the remaining 3%. The card market is split between Mastercard (43%), Visa (40%), and various other and local card schemes (18%).

Almost 70% of the population of this region has a bank account. But this figure masks significant differences in financial inclusion in different markets. In Latvia, for instance, 93% of the population has a bank account; whereas in Ukraine it’s just 63%. Understanding the financial maturity in a market, and how its people save and pay, will be an important part of any merchant’s entry strategy for this region. There is no “one size fits all”.

Seventy-eight percent of the region’s inhabitants have an Internet connection of some kind. And 60% have a smartphone connection. Again, however, this figure masks significant disparities. In Estonia, these figures are 91% and 65% respectively. In Bulgaria, this drops to 71% and 60%. The EU members among this group all have digital inclusion and development plans which are updated annually.

Russia, the largest country in this region, is 75th in the World Bank Global Logistical Performance Index. Particularly in sparsely populated rural regions, delivery may present a challenge. Even in some of the region’s smaller countries, logistics may provide challenges. Latvia, for instance, is 70th on the index. Even though it’s a comparatively small country, particularly in comparison to its neighbours, it’s still roughly a third again the size of Denmark with a population less than half Denmark’s five million. Companies entering the Eastern Europe and CIS market should investigate local delivery arrangements and costs, particularly for the last mile.